~For Haiti With Love Newsletter~

Headlines have gone to other earthquakes and now Iceland’s volcano and Europe’s ash fallout and taken with them the attention and funding… yep, things are back to normal in the contribution department…

HOWEVER Haiti is an entirely different story with the lines of hungry people increasing daily, the clinic activity remaining high because of all the new folks in the north from the quake. We didn’t get the millions, we didn’t get hundreds of thousands… we did get an increase, but not comparable to the increase in need. We do count the blessing of limited loss.

We have a man trying to raise funds for us but the foundations tell him “Haiti already has money.” But it is either down south or being held now for rebuilding and long-term projects that leave people homeless and starving… we thought those first few weeks were the biggest challenge, but it was only the slow beginning of a daily increasing need. Hang in there with us—please? And we will try doing all that we can for as many as we can...

“Do what you can, with what you have, where you are”

Randy did it again and I must share this with all of you… wow! He came across a song written by a minister and musician, Bryan Sirchio

Staring At My Overflowing Plate

It's so easy not to see you
Close you out like a shade in the window
Your condition seems so foreign
Are you lazy? Why are you so poor?
Someone said you and I are connected
That your hunger is linked to my fatness
But how can that be-I never met you
I don't know your name
I've got problems of my own
I'm so busy-I do good things
And I don't know if I can make room
in my life for your misery
Someone said that the whole world is changing
For you no longer will stand to be used
But talk like that-it makes me frightened
Scared what I might lose

Apparently Bryan wrote this song in Haiti after dining at a restaurant. As his plate, overflowing with food arrived at his table, the waiter was quick to pull the shades to block out the noses of the starving children's face pressed against the window. In a country where over four and a half million people try to subsist on less than a dollar a day, it is very easy to want to pull down the shades.

As I write to you today Roseline is making her final preparations for her departure for Haiti. Last week she shipped 879# and there will probably be a matching shipment the first of the week.

This will be an exciting, busy, productive and quite hectic trip for her as she lands on Thursday and will probably have dinner with the “guy team” of Jim Willie who arrived Monday. She will see the guys off with Presume on Friday, prepare the headquarters for incoming on Saturday and after church…

Présumé has started a children’s church for the orphans, the school children and all neighborhood kids—after church they are all fed a big meal… this is children from the Madeline area of Cap where Roseline and Presume live. They will feed the children after the services and then take off for the airport… where they will meet Linda Watson with her daughter from Canada and two Floridians… joining this Canadian group will be Barbara and Joan from the Trinity Rotary in New Port Richey… (and yes, those little kids will eat it all) 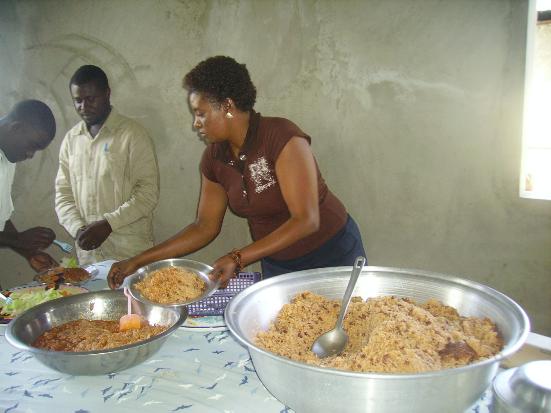 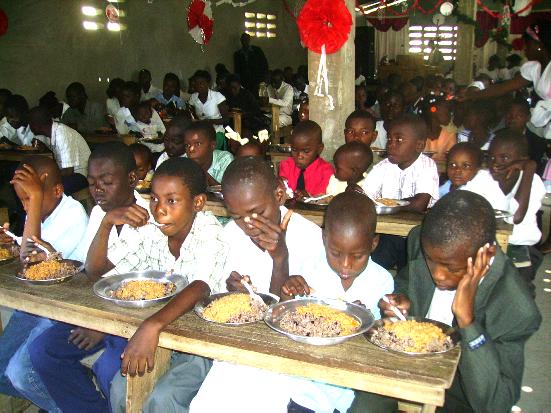 MORE… Sam Davis and Jordana from Burn Advocates Network will arrive on Sunday night. Medical Angels with BAN supplied the new PT/OT facility. They will then meet with our team and staff on Monday and tour the headquarters and clinic then all will go to visit the orphanage. Pray it doesn’t rain?

ON TUESDAY, there will be a formal dedication of the new Physical Therapy facility at the Cap Hospital… Roseline and Presume have been invited as guest at that dedication.

We have a shipment going down on MFI to Cap airport and a container of FMSC on its way to Miami for sea shipping.

Ahh, imagine that Roseline remembers the simpler days before the quake when all she did on her arrival was inventory the medical supplies, unpack, greet hubby and then play with her toddler for a while. It is exciting to get teams again.

Présumé e-mailed us this photo while Roseline was in Florida, these five little orphaned girls were brought to him from Port au Prince by the Haitian government to be added to the count at the orphanage. He has been resisting adding to the number because of the lack of funding… but this wasn’t a choice. 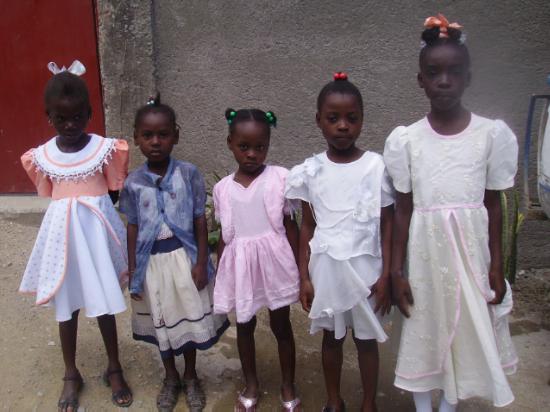 It is a very small sampling of the government’s challenges… what are they to do with so many children who have lost all of their relatives in the quake and are so young and so alone? It is very safe to say now that we don’t know anyone who has not been directly affected by the quake—either loss of family, relatives, friends or businesses… the affects are involving the entire country and all are hurting in one way or another.

As Roseline has been communicating with Haiti this week it had been raining day and night, non-stop. Everyone has colds and fevers and are suffering from the wet and cool weather. The rainy season is only beginning and Haiti is definitely not ready for it. How could they possibly be?

We seem to have a wall division of FHL right now. First it was repairing the wall of the school that was destroyed by the trucker who thought he knew more than all the other guys and then lost control on the hill. Haiti is unique—he refused to follow directions but FHL had to not only repair the wall, but also repair the truck!

Now it has been determined that in addition to the outdoor latrine being damaged by that last quake shake, our wall around two sides of the headquarters is going to have to be quickly replaced for security reasons. Anyone have an extra $13,000? That is the estimate for this project.

There are always needs and God is always faithful… but when and how much are always questions. Presume cannot locate an appropriate used vehicle for the airport and supply runs (to save the big truck for cargo runs)… and the new one he is looking at comes with a price tag of $52,300. Now there is a nice piece of pocket change.

Please pray for the hurting of Haiti, for the success of our upcoming teams and for funding for the wall and a truck?

God Bless you and thank you for all that you are doing. Eva

In Memory of CHUCK O’BRIEN

In Memory of JENE & HELEN FARRELL

In Memory of BERNIECE & ART SCHMITT

In Memory of MARCELLA GARDNER

In Memory of ANA SHARPE