When Don arrived in Haiti in October he was greeted by Mr. Beck who told him that he has decided to liquidate his assets. He said he had a solid offer for the property and building that houses our headquarters for $300,000 (which turned out not to be true), but would give us first option for $200,000. We could give him $200,000 and buy the property or be out on December 31.

First was anger -- he had always told us it would be in his Will to be For Haiti with Love's property for so long as there was a For Haiti with Love. Then panic -- how could we find another place, get moved and still have the Christmas Party, just too much! Then reason set in. Pray.

Roseline came out with an interesting observation, "after all the homes we have built for people and all the marketplaces for villages, we may be homeless."

This is God's work. He has provided all that the work needs for the past 30+ years, so we put worry on the back shelf and prayed; listening for His solution to this new twist. There was a possibility for the property down the hill a ways, but there has been no word on that yet. Mr. Beck did offer we could go with half now and the other half "later," whenever that might be.

In talking with the Haitian businessmen and wealthy, they all tell Don that with the property's location, being on high ground and having good water it is easily worth half a million, yes, U.S. dollars, so the $200,000 is quite a deal! When Don asked if they are interested in helping, they point out that they are trying to get their money OUT of Haiti, not in making further investments there. That part is bad news for the poor of Haiti!

Our Directors felt it would be good to try to purchase the headquarters because people are used to coming there for emergencies. The people know where to come and time is valuable in dealing with burns and other emergencies. However we didn't think that any of our Board members were in a position to front $200,000. Just as certain that we should keep it would be Dorothy Burt and others who made it possible for us to add the clinic and pharmacy to the existing building right after the embargo. Though we had more than gained the benefit of that investment, it would be good to keep the location and to be able to continue to offer the emergency medical services from the location everyone is familiar with finding.

What do you think?

We fleeced this to the Lord. In the past when we have asked for help and gotten it we consider the Lord is saying "yes." If we don't get help, we take it as a "no." In this case it isn't quite as simple as a yea or nay, but that is the only place we know to start.

We asked such questions as how many would be Guardians of this Lord's work by contributing $1,000 toward the wall that guards the property? Is there a church out there that would like their name on the Pharmacy? On a guest room? On the kitchen? On the family room? Didn't work, so we got practical.

Rather than sponsoring the purchase of an area of the headquarters, it became more feasible to ask how many could pledge toward the purchase. We had 478 active contributors (many on fixed incomes), $200,000 divided by 478 would be $418.41 each, was that feasible? 200 @ $1,000? 400 @ $500. Would there enough who would do more to compensate for those who couldn't help? Indeed there were! And... the regular contributions didn't suffer! God saves us once again!

What exactly are we talking about? For many years now For Haiti with Love has been leasing a structure from Mr. Beck for the headquarters of the work. There are four bedrooms, four bathrooms that can be used to accommodate teams coming to Haiti to help with the work of FHL. There is a kitchen with refrigerator and LP gas stove for cooking, good water from the mountain stream above and electricity from one of the four generators. 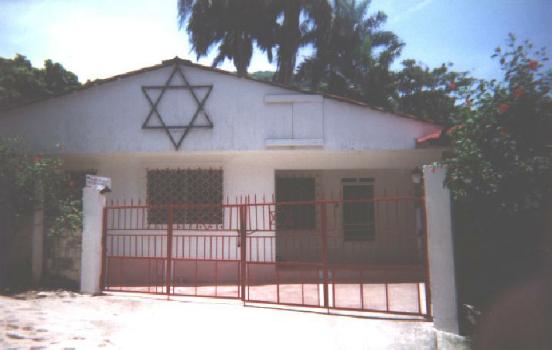 There is a long porch -- where patients wait for their turn in the clinic, there is a large clinic room with good water, two examination tables and a lot of supplies. Behind the clinic is the pharmacy and a full bathroom where patients can go to take a shower, etc. Above the pharmacy is a room that the DeHarts utilize as their personal living quarters, it also has a bath.

Under the back of the house (lower than the front because it is built on the side of a mountain) is an enclosed area where supplies for construction jobs are stored along with the tools and equipment for construction. Under a large sweet orange tree is a sizable area where the Christmas party is held on Christmas Day, where trusses are built and other construction jobs carried out. The laundry is done in this area as well as the cooking for Christmas and other celebrations where we share with the working team members of FHL.

When there are no teams the rooms are utilized for storing and bagging food for the food program, keeping the inventory of formula for the babies, clothing for the emergency patients who have lost everything in the fire that burned them. We also store school supplies for distribution when school starts and another supply for when they go back after Christmas break.

The large central room is the gathering place for teams, the meeting place for business, the large table the planning table for construction projects or the food table for seating and feeding team members. Nothing in the headquarters building is single-purpose. It is there to serve the poor.

Watchmen at the front gate greet family members coming for their weekly supply of food, they greet the children coming for tuition money, families coming for support money; they quickly call for medical help in the clinic when there is a burn, cut or other emergency injury. There is a poor box near the front door where coins are distributed to the "moms" who need a little money for charcoal, spices, medications, etc.

Just where For Haiti with Love's headquarters was to be was in God's hands. Our contributors came through with flying colors and we give God all the Glory!

We have now added an enclosed pavilion which serves to protect food when we have a donation of the food packets or a container of split black beans - it is also an off site location for medical teams wishing to go down. We cannot have "sick" people in the same area with the burn and emergency patients.

Thank God and all who responded to His encouraging.... This is the Headquarters of For Haiti wht Love.